On Tuesday the 2nd of July, almost five months to the day since she went into a nursing home, Ma passed away. It was a very peaceful passing and I was with her at the time.

As you know I never wanted her to go into a home and felt that I had somehow failed when she did, but in hindsight it was the right decision and one which allowed me to regain the love and affection which had started to dribble away a little when faced with the gruelling challenges of dealing with someone who is in late stage vascular dementia. Right up until the end I could still see flashes of her personality which showed that she was still with us and for someone so tiny her strength and determination was astonishing.

Her funeral took place yesterday, it was a celebration of her life and the force of nature that she was. I thought it would be fitting to close this blog with the eulogy I wrote for her yesterday.


Audrey Mulvihill née James was the youngest child of Edward and Annie James. She was born in Liverpool in 1930 and lived there until her early twenties. The majority of her late childhood spanned the second World War and although she didn’t share many stories about that time she would often relate how much they loved cod liver oil and malt – she claimed it was like toffee. Having been on the receiving end of a spoonful I can promise you that it really isn’t.

Anyone who knew my parents could see that they were completely devoted to each other. They were married in 1952 and spent 58 years enjoying life to the full. Sadly they lost a much wanted baby early in the marriage but went on to adopt Peter in 1956 and me in 1961. Both of us were absolutely adored and cherished and have many happy memories of holidays in Trearddur Bay, Falmouth and beyond.

Mum was the ultimate party animal and loved entertaining – dinner parties, big parties, garden parties; she was never happier than when she was entertaining and planning to overfeed the world - and she loved the opportunity to dress up, put on the sparkles and dance the night away.
Being a product of her time meant that she was lucky in that she didn’t go out to work but she was always, always busy. She was a talented seamstress and made some outstanding things including a lot of her early Ascot outfits and also my beautiful wedding dress, but equally she always seemed to be making complicated curtains for someone, upholstering chairs or decorating cakes, because if she wasn’t sewing she was baking. I clearly remember begging for shop bought cake like ‘everyone else had’ and getting a short shrift on that one!

In later years they embraced the cruising culture and had some wonderful holidays with David and Glenys, visiting some of the most amazing places. Naturally Ma would adopt the waiter/bar staff etc. on each cruise – following a long history of doing this wherever they went on holiday and there are friends who are here today that are a result of this.

She was always astonished when people asked her if she came from Liverpool, convinced that her accent had long disappeared – despite still saying she had a ‘fair coat’ and made ‘furry cakes’. She was a very beautiful woman, looking at her photo you can see why dad utterly adored her.

I hope the party dad had planned for her when they were finally reunited is still going strong and that they are jiving away just like they always did. 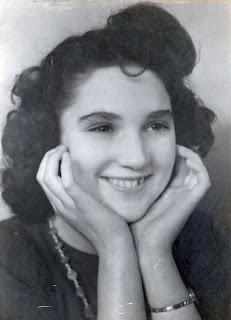