In the end I didn't get up until 6, so too late for a slow roasting of the turkey and too early for fast. Being obsessively compulsive about getting on with things I did a combination and it worked perfectly. Note to any Aga users: 7kg bird, top oven for two hours then bottom oven for three.

By 7.30 I was ready to drop something large and heavy in the kitchen if H didn't wake up. But climbing up the stairs in a noisy fashion did the trick and she was completely thrilled by her stocking presents. A lovely half an hour with a cup of tea and an 'Oh my God Mum' every couple of minutes.

Ma was a bit of a handful yesterday morning, probably because I was distracted with things in the kitchen and she didn't like it. Getting her into the shower was a patience testing 20 minutes with a soapy sponge in the face for my trouble. Still, we got through it and I dressed her in some suitably sparkly clothes and sat her in the living room with some porridge. Then I had to prise H out of her hat/gloves/socks and force her through the same routine. Then I shoved the Dyson round, stuck a duster in H's hand and went and got showered myself.

When I got back downstairs it transpired that Ma had secreted a KitKat in her trouser pocket. You would be amazed at how far that amount of chocolate can go. So a complete change of clothes just before the doorbell went. I was actually relieved when I realised it was chocolate tbh.

Mavis, Vic and Andrew were wonderful company and we had a really nice meal. The roast potatoes were a triumph even though at one point I thought I was going to have to find oven chips. Bloody King Edwards - not a Maris Piper to be found in Morrisons. 6 minutes par boil but when I drained them in the colander the sink half filled with mashed potato. Thank the Lord I have never knowingly under catered (and also have half an eye on the requirements for bubble and squeak on Boxing Day) so I was able to sift out more than enough in the end. Ma ate two carrot batons and spent the whole time wandering in and out of the room, trying the front door or going to bed. Everyone included her in the conversation if she was in the room and didn't bat an eyelid when she did some of her usual things.

We played several table games (Who am I?, Call my bluff etc.) which was a lot of fun, manged to set fire to two napkins and the indoor sparklers were a huge hit.

Ma went to bed as soon as the three Musketeers had gone, refusing to eat anything at all. H and I watched Dr Who then she disappeared and I watched Downton. A lovely end to a very nice day.

Sorry about the crappy photos - the camera on my phone isn't very good. Although it used to be ok, so not sure what that's all about. 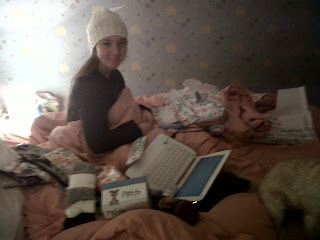 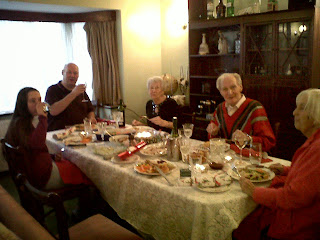