Another boilerless start meant keeping Ma in bed until I managed to get the blasted thing lit and the house warmed up. She had breakfast in bed - porridge - and stayed put until about 10:30 when she got up to watch This Morning but declined to get dressed all day. She was disappointed when she discovered it was Eamon today - not a fan it has to be said. I think the words bloody and idiot were employed on several occasions. I'm not a fan of Loose Women so went into the kitchen to do some prep for Christmas day (cranberry sauce, make-ahead gravy, that sort of thing). Turns out Ma isn't a fan either if I'm not in the room so followed me from Aga to sink to freezer to Aga etc. Not irritating in the slightest. No really.

We've had quite a few imaginary visitors this afternoon and one real one who called in for a cuppa and dropped off a bag of Bramleys and quinces. Thanks J!

Today has been a day of bundling things and trying the front door every five minutes. Very very quietly - I suspect that if the door wasn't locked she'd be off in a flash. In her pyjamas and socks and in the middle of one of the frequent snow/hail showers we've had on and off all day. If anyone thinks I'm horrible for keeping everywhere locked up tight, then that is why I do it. And why I have to do it.

One theme of today has been 'going for a nap'. This involves getting into bed and me getting her a hot water bottle and closing the curtains. 'Have a nice rest' 'Oh yes I will, I've been looking forward to this.'

It's the television, it isn't real. I'm sorry you can't go in the car/hold the baby/buy that clock.

There's no one here except us. And the dog.

No I don't want to get into bed with you, sorry!

You must eat some proper food. Celebrations don't count.

Interesting start to the day. Undressed Ma ready for her shower and five latex gloves fell out of her gusset...

Just been to the garden centre and bought a Christmas tree which will be delivered on Friday. This is a compromise between buying a tree now (before all the good ones go) and waiting until H arrives on the 19th. Because it won't be here until Friday I will probably be able to wait until Monday to decorate it.

This afternoon Ma has been very restless, carrying a blanket with her everywhere, trying the front door every three minutes or so and asking where Peter is every five. She's been shouting at the TV because no one will answer her and pacing, pacing, pacing. I think she wants to go and see Mavis but they are looking after their son who has bronchitis so have their hands full. Everytime I turn round she's wearing different clothes - sometimes mine, which are at least three sizes too big.

It takes a massive effort not to get annoyed and frustrated with the constant repetition. I know she's struggling to make sense of things but I struggle to make sense of her making sense as 90% of her conversation now is completely incomprehensible.

My brain needs some off duty time in front of crap television. Good job it's Saturday then.

What sort of a mood are we in this morning? 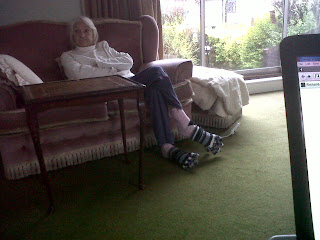 That would be the grumpy glove-shoe mood then.

I can't think of anything positive to say about today, sorry. I think I'll just draw a line under it and leave it there.