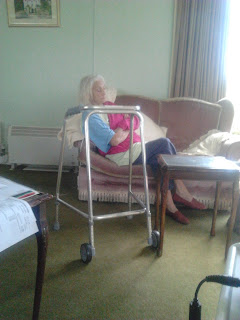 The mood this morning was so toxic that I felt it better not to interfere and let her get on with it and the picture above is just after she had refused breakfast for the third time. The body language says it all! Even the walking frame is being used as a barrier - normally she leaves it in obscure places. She did eventually eat some porridge but hasn't eaten anything else yet today. I'm not sure how she managed to get the fleece on just one arm with the zip fastened but the entire ensemble (vest, nightdress, trousers, fleece, pants) had to be put in the laundry at midday and into the shower she went.

After the shower she was very jittery and couldn't get herself dressed so I helped her then took her soiled clothes to the laundry basket. Back in the bedroom and there she is in bed again... Mavis and Vic called round just after three, stayed for an hour but were equally unable to prise her out of bed.

She is now up and will be having (a delicate portion of) new potatoes, steak and kidney pudding and blue cheesy leeks in about 10 minutes and then I'll do my best to keep her up until a reasonable bed time.

I had great fun playing a short story game on Twitter today, it reminded me of the days when I used to do a lot of flash poetry online and probably should start doing it again. It definitely stretches the creative muscles.

Tomorrow is 'club' day (thanks Sue!) and I desperately hope she will go. All week I've had everyone referring to it as a done deal - when you go etc. - so I'm hoping it has worked. If she does then I plan to go swimming and possibly check out Aqua Zumba, although as Isabel suggested this does sound like it could be a euphemism for ritualised drowning.

Keeping her up until a reasonable time lasted almost exactly 30 minutes. This doesn't bode well for overnight.

Hello????
Hello Mum
Are you getting up yet?
Nope it's nearly 11 o'clock, time for bed.
Ohhh why haven't you been already, you need your sleep.
Because it's just bed time now.
Is it? I've been asleep all night.
You need to sleep for a bit longer though. Until it gets light outside.
Yes ok. Will you leave me some things? I need them for my lips.
A cup of tea?
Yes that's it.