I'm viewing the increased dose in sleeping tablets with cautious optimism - it was a 6am start today which is a vast improvement on 3am!

However, her mood hasn't picked up yet and we had another day of tears and moods. She spent most of this morning lying on, across or in her bed, refusing tea/coffee/chocolate hobnobs or chocolate mini rolls. So after lunch I suggested we went to look at the new day centre. She suggested we went to see Mavis. Seeing as I was driving, I won.

The centre is very nice - light and airy and not too big. When we arrived they had just finished tea and cake and everyone was sitting around. Apart from the two who were on a permanent loop involving heading for the door and being gently herded back into the room of course. Several ladies said hello to Ma and she is always convinced that whoever she meets she's met before so this often causes confusion - especially when the other person also has dementia. But the visit was relatively successful after a shaky start when we were left in the foyer for a few minutes while Emma (senior carer) resolved a problem. One lady was very abrupt with Ma when she said she thought they'd met before:

I think I know you. We've met before.

I don't think so! I'm a Nurse. I know more about these people than you do. (turns back)

In times past Ma would've said something but these days she's not really making conversation and actually isn't interested in what anyone else has to say.

She made it to 6pm (admittedly with a face on) after having egg and chips and is now in bed. I told her it's Saturday tomorrow and we can have a nice lie in. I even managed to say it without a trace of irony.

When we got back I took the laundry out of the washing machine and Ma offered to help. So I put up the clothes maiden and left her to it. 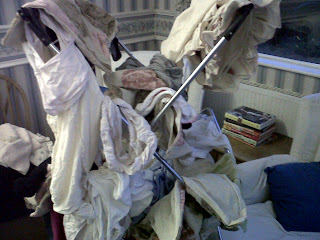 I think I'll be decorating the Christmas tree.
Posted by Beeeze at 18:16