Where's D Ream when you need them?

The dulcet tones of the burglar alarm going off in the small dark hours of the morning will get you down the stairs pretty rapidly I can tell you. Having told Ma a couple of times to go back to bed during the night she decided to go and talk to next door instead. Since then (approximately 6ish) she has been in constant tears. Now I'm not entirely sure why - other than I'm horrible and it's all my fault, naturally - but the gist of this behaviour seems to be because she spent 'all night' in bed. On her own.

Anyway, she is now kissing the photograph again and is going to pack a bag and go to her friends. Fine. I have the front door key so no doubt the sound of several klaxons will alert me when she departs.

She's refused breakfast which is probably a sensible thing in the interest of self-preservation.

Will you have some breakfast?

No *sitting in a huddle in the bedroom*

No. Not a poached egg.

Will you have it in the living room?

No I'll have it here

Ok its ready I've put it in the living room 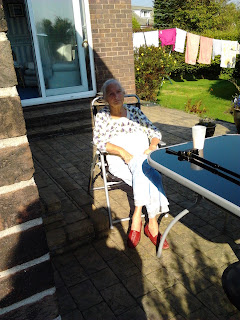 I finally persuaded Ma to sit in the sun for a while. Note the stripey pj bottoms under the trousers and although you can only see two tops (one only half pulled down), there is another one under there...

This is after another huge crying spell brought on by me going to the supermarket. Last time I went she hated going with me, so this time I explained where I was going and that I would be a while. Despite racing to, around and back from Tesco in exactly one hour she went into meltdown. More tears, hair pulling, accusations and kissing dad's photo etc.

However at one point she told me that 'the girls' at the day centre yesterday were 'absolutely lovely'.

You really, honestly, truly, couldn't make it up!
Posted by Beeeze at 08:29